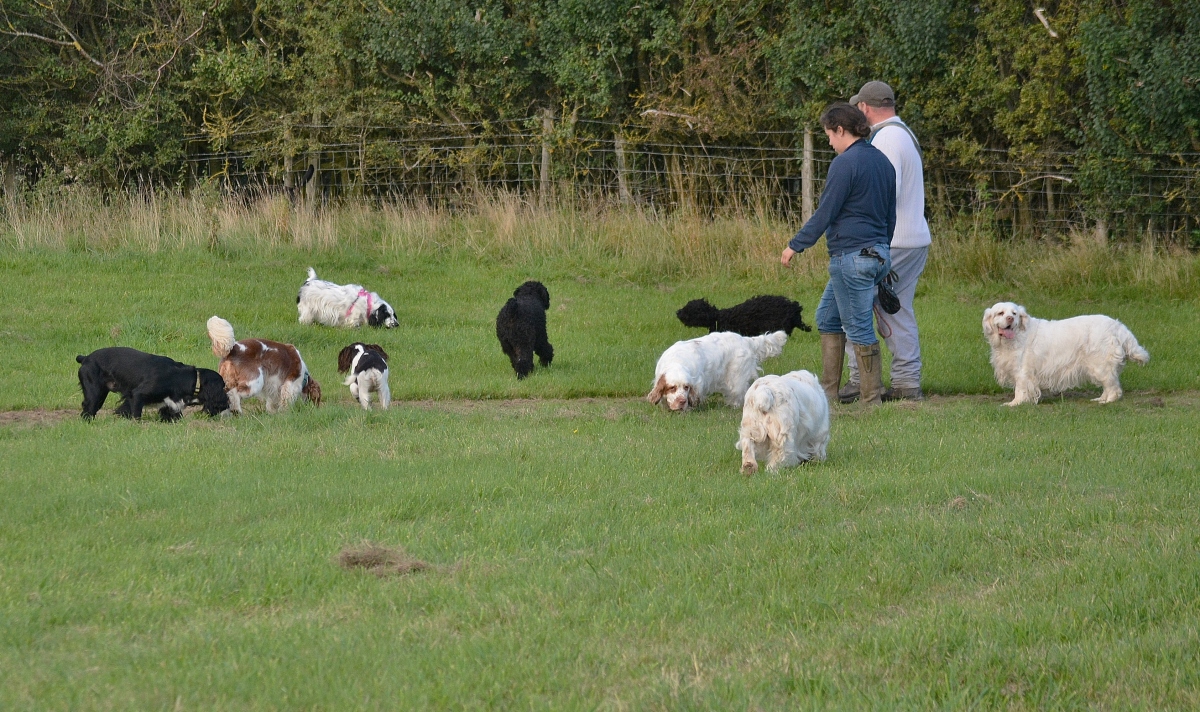 It is great when your dog is happy to be in the company of people and dogs from outside of the family and it means that you can go on walks with friends with no worries. This, to me, is a well socialised dog, but what does that really mean? Well it means different things to different people and there seems to be a real misunderstanding developing.

Everyone knows that we need to socialise our dogs (and yes you can socialise an adult dog just as you can a puppy).  It’s great that the message is getting out there. However, socialisation is the process of getting the dog used to (habituated to) everything that it is likely to see during its life; so vehicles, people, children, other animals, household objects and noises, aeroplanes, etc. This process should mean that the dog develops a neutral or slightly positive association to these everyday things and will prevent them developing negative (scary) associations which could lead to problems later on.

However, it appears that socialising your dog/puppy has also developed to have another meaning; that of allowing your dog/puppy run over and play with everyone else’s dog, much to the annoyance of those dogs’ owners. This isn’t socialising, this is allowing your puppy/dog to run amok and potentially learn to bully other dogs. There is a school of thought that a puppy needs to be told off by another dog so that it ‘teaches him a lesson’ but that lesson could be very harsh and end up with the puppy becoming fear aggressive or the dog that they are harassing (and yes, it is harassment in many cases) could be scared and become fear aggressive to protect itself from rude dogs and your dog is likely going to learn how to be the play ground bully and that is no fun for anyone.

Yes, dogs do need to become familiar with other dogs, but in order to achieve this, it is not necessary for them to play with every dog they see, they just need to see other dogs. It is much more important that they learn to respond to cues around other dogs i.e. that they come back when they are called, that they can walk nicely passed other dogs without screaming and barking and leaping about. In fact, letting them play with every dog they see, is much more likely to result in a dog that pulls and screams/barks to get to them and is likely to result in a dog that completely ignores the owner and won’t come back when called (or be caught) until the dog has had enough. That’s no fun at all, and who really wants a dog which wants nothing to do with you? Mind, I suppose for some, it means that they can just stand there and watch their dog play/annoy/frighten dogs for a couple of hours and then they take a tired dog home….easy way to exercise your dog without putting in any effort yourself, I guess.

That doesn’t mean that you can go for walks with your friends and their dogs; that is what having a sociable dog is all about and it can be great fun. If you feel your dog would benefit from having more doggy pals, then why not take them along to a doggy day creche so that they can play with other well socialised dogs that are happy to be around other dogs? Of course, you need to ensure that it is a well run creche where the dogs are well matched for their play styles, where bullying is not tolerated and that the dogs do get some downtime during the day (s roughly one hour play time and then one hour rest time).

The the type of socialising that makes me cringe is when the owner of an aggressive dog rings up wanting to bring their dog to classes to socialise it. No, no no! This is not socialising, this is flooding! Remember that socialising should be a neutral or positive experience. Putting an aggressive dog into a room full of other dogs that it is scared off is not going to make it like other dogs. If you don’t like spiders and I put you in a room full of spiders for an hour, will you like them more? No, you’ll probably be even more frightened of spiders (and also not trust me either for playing such a dirty trick on you). Aggressive dogs will find group classes very stressful, which may make them more reactive or they maybe be so scared that they actually shut down and just stop doing anything. sadly, some owners (and some dog trainers), think the dog is then ‘fixed’ because it is no longer reacting….The dog isn’t fixed, its just been scared into not reacting…bit like you back in that room full of spiders, you don’t know which one to scream and run away from because as soon as you move away from one, there is another near you…so you just become immobile…not cured, just terrified.

Aggressive dogs that are well on with their rehabilitation training can be introduced to dogs in a controlled fashion, where there is one dog introduced at a time and at a distance that the dogs can cope with and then that positive association to other dogs can be built, allowing the dog to become sociable.

Let’s get the foundations right, habituate your puppy/dog to the presence of other dogs, work on them being able to respond to your cues around other dogs and people and allow them controlled access to other dogs rather then just letting them have a free for all. There should then be a whole host of sociable dogs out there that can be allowed to play (provided the other owner agrees and if the other dog is happy) rather than the scores of out of control dogs that totally ignore their owners and do their own thing.

Fully qualified dog trainer and educator, delivering workshops around the UK. View all posts by caninetutor

One thought on “Sociable or Socialised?”