We’ve had a couple of warm days recently and hopefully, there are more to come. Our canine companions enjoy the sunshine as well, but we do have to take care.

Avoid walking your dogs in the hottest part of the day (lunchtime) as even on a 30 min on lead walk in full sun can cause a dog to overheat and get sunstroke. Allowing them to play fetch or runabout like loonies for 30 mins or more in full sun, can also cause heat stroke.

You are best to walk early morning and late evening when the temperature has dropped. Always take water with you so that your dog can have a drink. Also be aware that the temperature at your dog’s height may well be different to that for you…long grass will trap the heat low down and make the dog warm as it will prevent that cool breeze reaching them, although you may think that it is cool. Pavements can get very warm in the sun, resulting in your dog’s feet getting warm, which impacts his ability to cool himself down (dogs can sweat through their feet).

If your dog is panting heavily and the end of the tongue has taken on a spoon shape, then your dog is too hot and is starting to suffer from heat stroke – get the dog into the shade, use tepid water to cool the belly and groin area. Phone your vet and get there ASAP.

Dogs can over heat whilst on a walk round the streets on lead, whilst running in the fields/park, playing ball and so on. They can even overheat whilst you are driving along in your car with all the windows open as the sun shines through the glass straight onto your dog. Use sun blinds to shield your dog from direct sun and make sure that they have plenty of water and are actually drinking. Frequently stop and check your dog on long trips.

Do not leave your dog in the car in this weather, the glass causes the car to heat up like a greenhouse in a very short time and dogs can die in less than 30 minutes. If it is too warm for you to sit in the car with your windows shut and your airblower/air con turned off, then it is definitely too hot for your dog! even with the windows partially open and bowl of water in the car, it will soon heat up too much for the dog to be able to cool itself down. Special modifications are needed to keep dogs cool in vehicles in this weather.

Heat stroke is a very real killer; if you suspect your dog has got heatstroke, then pour cool (not cold as it can cause shock which in itself is fatal) water onto your dog’s belly/groin area, offer frequent cool water drinks and contact your vet immediately.

If you have a dog with a short muzzle (French Bulldog, Boston Terrier, Pug, etc.), then you will need to be even more careful that they do not overheat. Due to their short muzzles, they cannot pant efficiently which means that they cannot lose heat. Be very careful to only walk them in the coolest part of the day and to keep the walks short to prevent overheating. There is nothing wrong with skipping a walk if it is too warm, your dog won’t die from missing a walk, but may well die if you take them for their usual walk on a really warm day. Your dog will enjoy some food searching games or playing with a snuffle mat or a tasty frozen stuffed Kong (check out our Frozen Kong Recipe page on Facebook)

A kiddies paddling pool is likely to be appreciated by your dogs in this weather, but please don’t force them into it if they don’t want to get it. 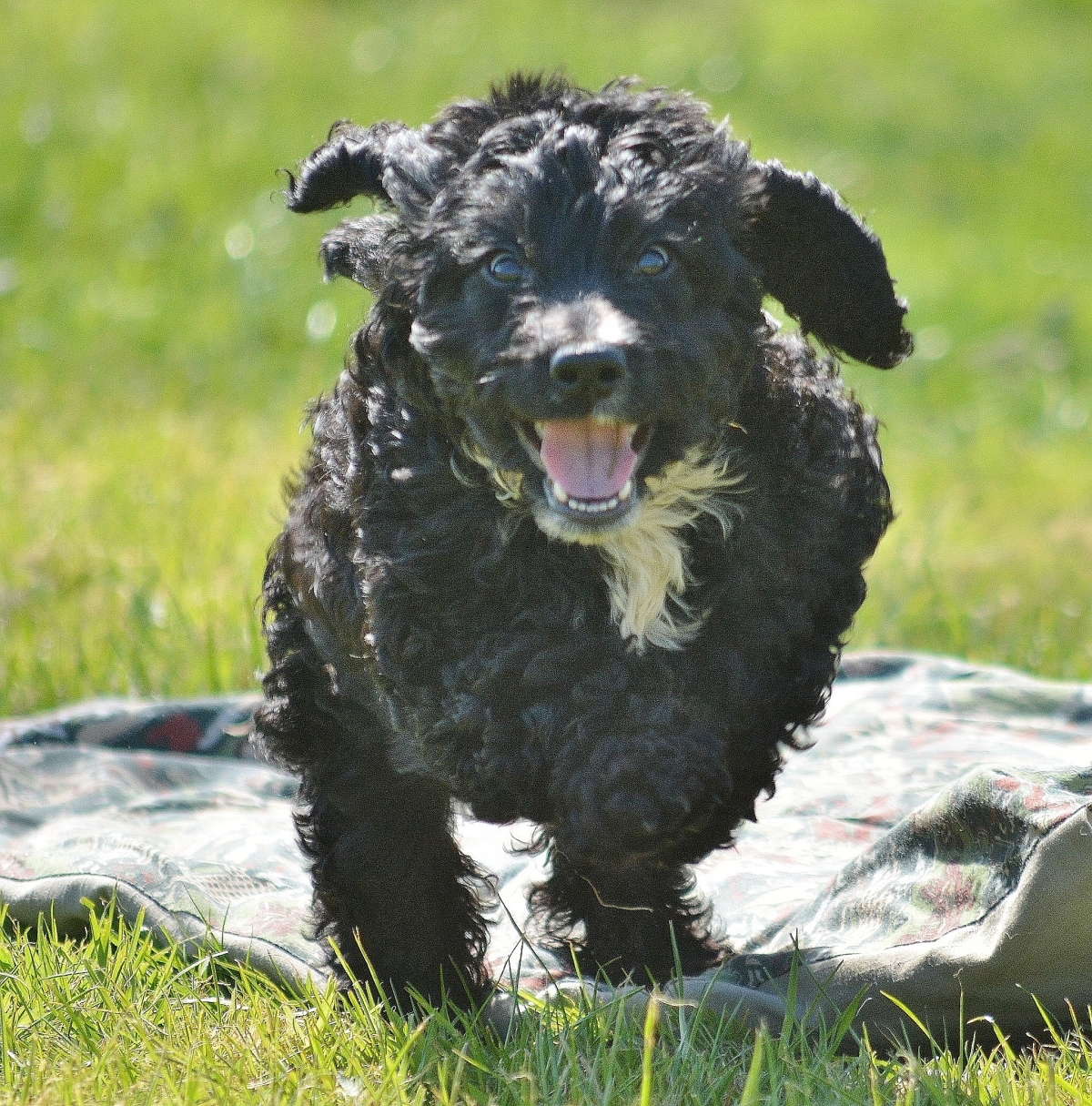 Tug is a fabulous game to play with your dog but sadly many dogs never get to enjoy this game with their handlers. Why is this?

Playing tug does not intrinsically make dogs aggressive, it actually makes them more careful with their teeth IF you play using the following rules:

Play stops when you want it to.

Teaching a dog to be careful with its teeth is very important in this day and age. Playing tug without rules can result in a dog that thinks that the tug game also includes playing tug with people’s clothing and or grabbing hands to play tug. Using the rules above menas that tug games are controlled and safe.

Play between dogs is very much a game of give and take and our games with our dogs should also be interactive. Watch what happens when you let your dog win the tug toy; does the dog suddenly try to take over the World or does it bring the toy back and thrust it at you in an attempt to get you to play again. Generally dogs will bring the toy back to you and try to engage you in play, which isn’t the behaviour of an animal trying to be dominant (if you still think that dogs are here to be dominant of people  there is plenty o information on the Internet which disproves this thinking).

This is a common belief of gundog trainers. In actual fact, playing tug is a great way of a dog releasing tension (they hold tension in their jaws) and again by teaching them to play tug with rules ensure that the dog learns to be careful with its teeth. I’ve actually found that playing tug is great for keeping a soft mouth in my gundogs but obviously we have specific toys for tug and different ones for retrieving. The dog then learns contextually i.e. I can bite and tug hard on this toy but need to be gentle with this retrieve item.

I’m not quite sure where this idea comes from, unless it is some people think that by playing tug with a hunting breed such as a terrier will make the dog want to go off and hunt and kill small furries. Yes dog will shake the tug toy when they’ve won it, but this does not mean that they are going to develop into rabbit and rat killers. In fact, it is more likely to provide an outlet for those instincts. Playing tug is a great reward for a dog that has just recalled away from a prey animal such as a rabbit, hare or deer.

Tug is a fabulous interactive game that helps to build the relationship between dogs and their humans. Tug means that you are playing with your dog, not just throwing a ball for then to retrieve and amuse themselves. Tug is a great reward for your dog, great for teaching self-control (Impulse control) and is terrific fun! A good energetic game of tug is a great workout for both dog and handler and should leave you both feeling tired. Enjoy

To learn more about how to build Self-control/Impulse control in your tug play sign up for our online course.