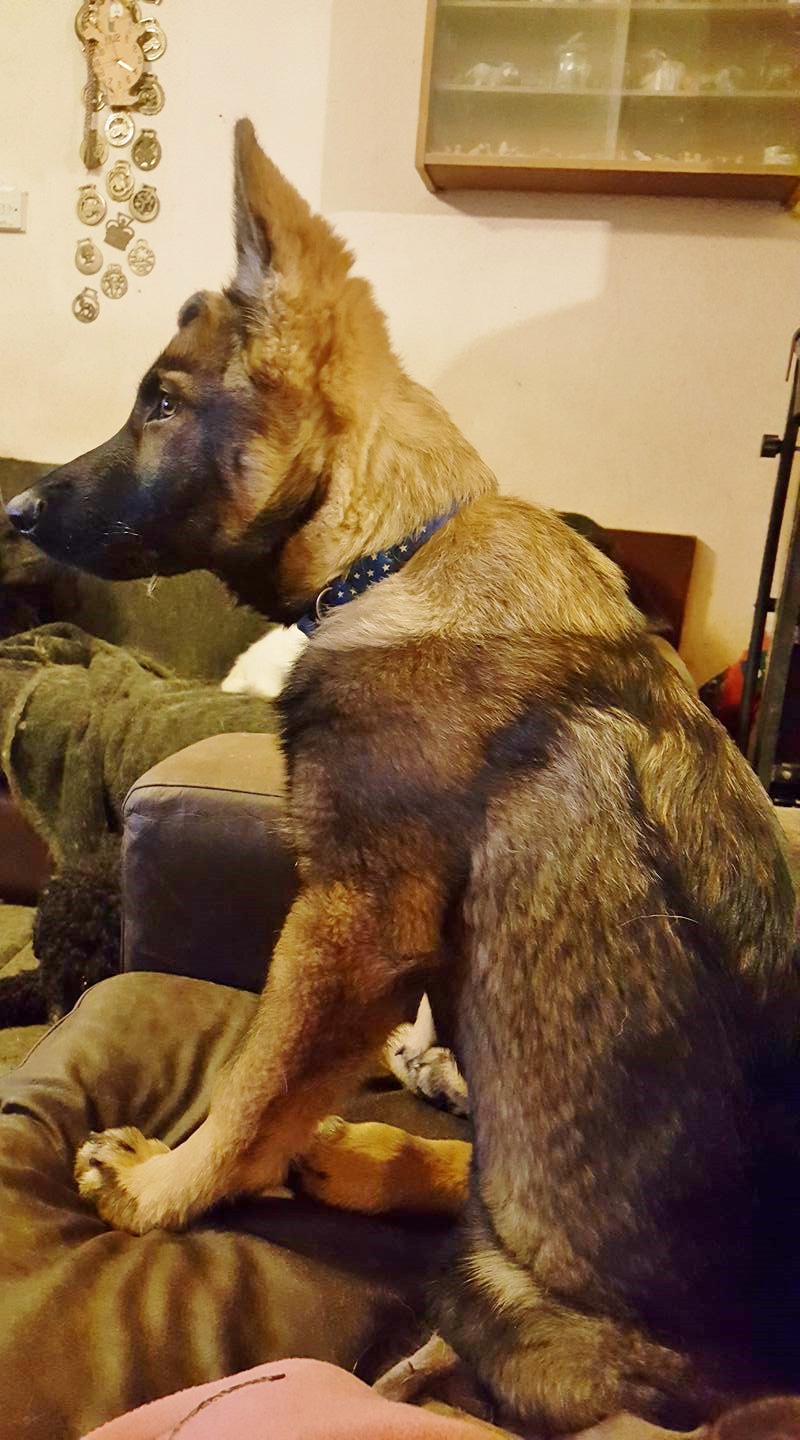 Lara is now 15 weeks of age and has been here almost 3 weeks. Time flies when you have a puppy! She’s getting huge now and is almost as tall as tallest Springer Beau and bigger than Rush (cockerpoo).

She’s not just got bigger, her character has change, she’s no longer than quiet shy puppy; she is a thug! She’s bitier, noisier and more active, but on the up side, she does settle down whilst I’m working (she’s currently asleep at my feet) and she’s still go a great appetite.

She’s continuing her education with regards on self control around food, which is much easier now that she isn’t so hungry and with recall games (luckily I’m a member of Susan Garrett’s Recallers programme, so lots of games to play). I do need to go back and revisit the collar grab game as we’re going through a bit of a blip with regards to that.

We’re having loads of fun playing tug games with various tug toys, but work is needed on getting her to bring items back. Normal enough stage for a puppy.

She is bitey, and will be started to change her teeth soon. When she gets bitey, she is given an appropriate object to chew one. As with most puppies, squealing like  a puppy just makes her bite harder, so re-direction onto an appropriate chew toy is important. I need to find some old towels to moisten and freeze, so that she has a cooling chew toy for when those gums are sore.

We’ve had a couple of days where Lara has had a bit of an upset tum; not bad enough for a vet visit, but enough that she’s had to wake me up several times overnight to go out. She is good as she does let me know when she needs to go out and her house training is coming on fabulously, but I could have done with a bit more sleep. I have definitely had ‘puppy brain’ for the last couple of days and have gone through the ‘why did I get this puppy/’ ‘This was a mistake’ stage. Funny how things improve when you get a good night’s sleep as I did last night.

We’ve also started playing with teaching her to put her front feet on objects (only low ones) and she’s learning to search the living room for hidden treats (easy searches to start with). She still has little meanders on lead whilst the big dogs runabout, and she’s finally started to play with the other dogs, but that is supervised.

We are now having an issue with her coming in from outside. She’s getting a bit big to pick up and fetch in (she really is a big puppy for her age!) and  have fallen into the bad habit of luring her in through the back door (bad trainer) and so she has started holding out to see what is offered,k before she decides whether to come in or not. It’s cold and  I really don’t want to stand there with the door open for several minute whilst she decides to come in, so a new strategy was needed.

She now gets about 30 seconds to decide whether she is coming in or not. There is no food in view and I’m not luring her. If she decides to come in the door, that behaviour is marked and then a food reward is produced and given. If she decides that she isn’t going to come in, the door is closed and I’ll open it a minute or two later and try again. I think it took six attempts the first time I tried this, we are now down to just two attempts on the last go. Something I need to keep working on until it is cracked.

Apart from these minor problems and a bit of redesigning of the leather suite, Lara’s ast 3 weeks have been progressing in the right direction.

Her microchip is registered in my name, but I do need to change her KC registration over to my name.

I do need to get some more photos of her though!

Fully qualified dog trainer and educator, delivering workshops around the UK. View all posts by caninetutor